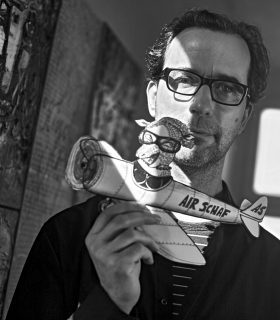 Matthias Friedrich Muecke was born in 1965 in East Berlin. Following vocational training in the preservation of monuments, secondary school exams and night school at the Kunsthochschule Berlin Weißensee, he worked as a window dresser, as a fireman and exhibition technician.

He has been a self-employed painter, maker of works-on-paper and set designer for film and television since 1988.  He has also exhibited his work in a number of one-man shows and also realised a number of books.  In 2000, he established Edition Mueckenschwarm.

He was also awarded the Stiftung Buchkunst prize that year; in 2013 the Brandenburgischen Kunstpreis and, in 2015, the Nordhäuser Grafikpreis. Matthias Friedrich Muecke lives in Krummenpfahl and Leipzig.