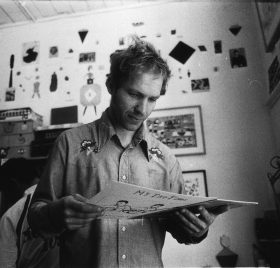 Bjorn Rune Lie is a Norwegian illustrator/artist who now lives and works in Bristol, England. Since he graduated from Falmouth College of Arts in 2001, Bjorn has developed a visual language which is highly recognizable yet constantly evolving.
As well as doing diverse commissions for a variety of international clients he also finds time to do his own artwork and book projects.
He has written and illustrated three picture books and his work has appeared on milk cartons, cider bottles, album covers and tea towles across the globe.
His latest picture book “Tohundre og sekstini Dagar”, written by Roald Kaldestad came out in 2014 on Magikon Forlag.

Moving away from his home country of Norway has led him to fully realize the beauty of endless forests, deep snow and the smell of pine trees, something which has crept into his work in several projects.
He often creates strangely beautiful scenes that are teeming with anatomically incorrect characters.

He’s always making life difficult for himself by refusing to take the path of least resistance. He loves cats, coffee and country music. He’s often flustered and his hair is thinning rapidly.